Over my four day break, I also heard that Jamie, who I had a brief fling with two months ago until I discovered he already had a boyfriend, had spilt from his boyfriend again. I didn’t really take much notice of the news, but on my return to work today, it was all confirmed that he was now a single man again. That thought stayed with me all day, and despite me trying to brush it away, it stuck with me.

As soon as I got home this evening, I phoned Jamie. He seems very well despite the break-up. However, by the time we’d finished talking, I was convinced that it wouldn’t be long before they’d both be back together again. I think I had rather surprised him by phoning him, but I probably shocked him more when I told him he knows where I am and that he has my phone number if he wants to talk and maybe fancy meeting up sometime. I think the silence from the other end of the phone said it all!

I’ve spent the rest of the evening wondering if I’d said the right thing and if Jamie would ever contact me again. Not only that, but I also told myself to tread more carefully if he does, because he could use me as a weapon again in getting his boyfriend back.

Lesson learnt? I think not! 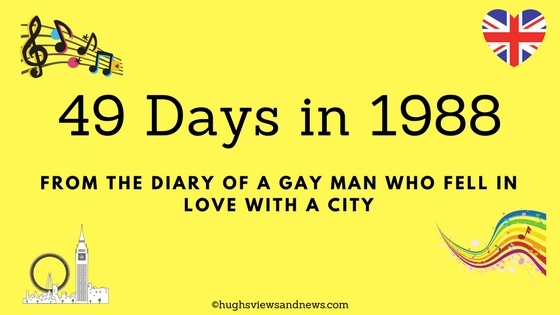 Welcome to this new feature for 2018 on Hugh’s Views and News. In this feature, I’ll be sharing snippets from my diary of 1988. We’ll also take a trip in Hugh’s Music Time machine to hear some songs from the 1980s which have been chosen by some specially invited guests.

This week my guest is the author, writer, and blogger, Christoph Fischer. I’ve had the pleasure of meeting Christoph several times, most recently at The Bloggers Bash, but I have also worked alongside him at a couple of book fairs.

Christoph was born in Germany, near the Austrian border, as the son of a Sudeten-German father and a Bavarian mother. Not a full local in the eyes and ears of his peers he developed an ambiguous sense of belonging and home in Bavaria. He moved to Hamburg in pursuit of his studies and to lead a life of literary indulgence. After a few years, he moved on to the UK where he now lives in a small town in West Wales. He and his partner have three Labradoodles to complete their family.

Christoph has written several novels, the most recent of which is based at one of my favourite annual events. ‘Over My Dead Body: Murder at Eurovision‘ is the second book in the Bebe Bollinger murder mysteries series. The first book in the series, ‘Body In The Snow,‘ had me guessing all the way through as to whom the murderer was. Let’s just say that I don’t make a very good detective when it comes to solving a crime.

Here’s the blurb for Over My Dead Body: Murder At Eurovision :

On her return from a cruise ship gig, Bebe Bollinger learns that fellow Welsh singer Bonnie Tyler has decided to enter a European Song competition for the UK. While Bebe jealously watches the pre-publicity trail for ‘Eurovision’ in Malmö, a string of ‘odd accidents’ endangers several participants of the competition. This stirs her desire for playing detective again but also a curiosity to check out the suitability of Eurovision for her own career.

Follow Bebe’s continued search for fame and a comeback before it’s too late, step into the weird world that is Eurovision fandom and see how Bebe gets on with her naughty daughter and deals with those evil TV presenters.

Click here to buy ‘Over My Dead Body: Murder At Eurovision’ on Amazon UK

Click here to buy ‘Over My Dead Body: Murder At Eurovision‘ on Amazon USA

Released in 1980, ‘Xanadu’ is the title song from the soundtrack album Xanadu and is the title song from the romantic, musical fantasy film of the same name.  It is quoted as being the favourite song ever of Jeff Wayne, who is the lead singer in E.L.O.  The song peaked at number one in a number of countries, including the UK, and managed to make it to the number eight spot on the Billboard Hot 100 charts in the U.S.A. Thanks for the brilliant song choice, Christoph.

Back in July 1988, it looks as if I was living a ‘romantic, musical fantasy’ with the thoughts of getting back with Jamie. Do you have a favourite song that’s connected to a musical? Share a link to it in the comments.

I’m taking a break next week so this feature will be back in two weeks time. It may be the second anniversary of my move to London, but that doesn’t stop the green-eyed monster paying me a visit. Plus, one of the housemates spirals into depression. Who will he look to for help? Click here to find out the answers.

Hello, and welcome to my blog, Hugh's Views & News. Click on 'Meet Hugh' on the menu bar to find out more about me and my blog.